How Do Ionic Air Purifiers Work? 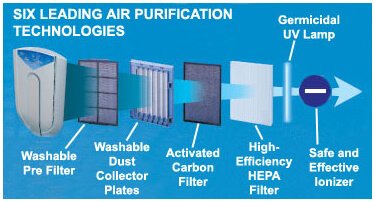 
Ionic air purifiers use science to remove irritants, allergens and other particles from the air you breathe. Words like ‘negative ions’ and ‘molecules’ may conjure up negative memories from science class, but the way ionic air purifiers work is actually really easy to understand.

All the particles, including allergens and irritants, are made up of molecules. These molecules will tend to have a positive charge, but they may also be neutral.

Ions are basically just molecules which have either lost or gained an electron. Positive ions may sound like the good guys, but some people believe that positive ions in themselves may be harmful to our health. Common everyday objects such as mobile phones, computers and other electronic devices tend to generate positive ions, and some people think these ions cause adverse symptoms such as headaches, anxiety, fatigue, low energy, and healthy cell damage.

Positive ions also tend to be prevalent in polluted, confined areas. As mentioned above, airborne allergies such as dust and pet dander are also likely to have a positive charge.

Ionic air purifiers generally use a corona discharge method to generate negative ions. These negative ions are created by high electric volts which push negative electrons into the air.  Negative ions naturally repel each other, so they will fly in all directions trying to get away from each other without any intervention.

Negative ions are just oxygen atoms which come with an extra electron. As these ions are negative, they are attracted to positive airborne particles and so when they encounter a positive particle they will latch onto it. This means that negative ions are able to attach themselves to things like dust, smoke, pet dander, pollen, and potentially even bacteria and viruses.


The benefits of negative ions may even extend beyond getting rid of allergens. Negative ions are typically found in nature, such as in forests, at the beach and in clearer air, and they are thought to help reduce stress, improve sleep, boost energy and even help with health problems.

One of the biggest selling points of ionic purifiers is their quiet operation. Whilst many other air purifiers use fans which can easily become annoying when you’re trying to relax, concentrate or sleep, ionic purifiers don’t tend to have fans and so they operate very quietly.

Ionic purifiers don’t tend to have inbuilt motors, removable filters or other moving parts and so they tend to be relatively low maintenance.

Ionic air purifiers operate at the molecular level, and therefore they are able to tackle even the smallest particles including bacteria and viruses.

The Benefits Of Negative Ions

Studies suggest that negative ions may provide effective relief from depression, anxiety and other mental health issues. Your ionising air purifier should not be used as a substitute for professional help, but it may prove beneficial all the same. Negative ions can also help with seasonal affective disorder (SAD) and may even be as effective as medication.

Negative ions may also be able to reduce headaches, improve concentration and help you sleep at night!

Some people are very dubious of ionic air purifiers because they create ozone as a side-effect. When you think of the word ‘ozone’ you will probably think of the ozone layer which helps protect the earth from UV radiation, but in this case, ozone refers to a molecule made up of three oxygen atoms. Whilst a small amount of ozone (i.e. 0.05 ppm) are generally deemed to be safe, even small quantities of ozone can have an adverse affect on your lungs, throat and chest.


Possible risks involve decreased lung function, chest pains, and inflammation of lung tissue. Some people are more sensitive to ozone than others, and it can especially affect people with asthma or other existing respiratory problems.

Another criticism of ionic air purifiers is that they don’t actually remove allergens, they just move them from the air to the floor or another surface and, if those allergens are disrupted by dusting or hoovering, they may end up back in the air again.

Ionic air purifiers have a number of obvious benefits.  The air purifiers use science to attack harmful particles, and negative ions may also have numerous benefits for your mind, body and soul. However, the risks of ozone and the fact that the allergens are displaced rather than eradicated are concerns which shouldn’t be ignored.

Some air purifiers contain a HEPA filter, an active carbon filter an ionic generator all in one unit, so if you are interested in testing the benefits of an ionic air purifier without putting all your eggs in one basket than that may be a good choice. You should be able to turn the ion generator on and off as needed so you will only use it when you want to. This means you can stop using it altogether and still reap the benefits of the other air purification systems at the same time.