How An Air Purifier Works & What Does It Do? 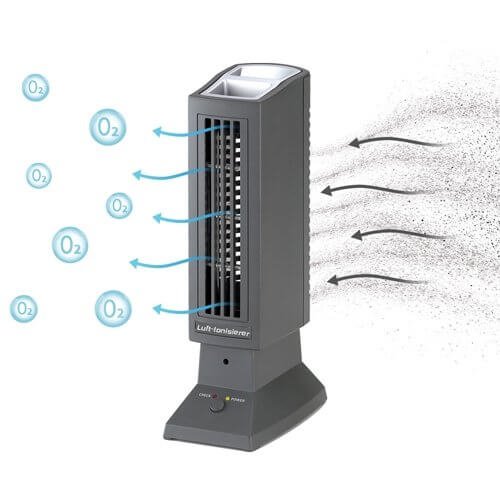 How an air purifier works

Air purification was once solely used to ventilate the protective masks that were worn by firemen to help them breath and protect against the harmful effects of smoke. Today they have increased in popularity and are now even recommended by doctors for their ability to reduce the risk of asthma attacks and allergic reactions. With all these different brands stating that they can ‘cleanse’ your air and make you healthier, you may be wondering how an air purifier actually works. If so you’ve come to the right place, because by the end of this article you’ll have a much better understanding of what makes an air purifier tick.

What is an air purifier meant to do?

Air purifiers are literally designed to ‘purify’ the air by removing and eradicating harmful particles and bacteria. They aim to to remove harmful airborne substances like mould spores, bacteria, viruses, air allergens and cigarette smoke, all of which can cause damage to your health and lungs.

How do they purify the air?

There are many different types of air purifiers, they operate in different ways, and they concentrate on slightly different particles. Some air purifiers use filters, whilst others may use ionisers and UV lights.

HEPA filters are a very efficient device that is great at catching unwanted airborne particles. HEPA filters are made out of glass fibres, and their design allows air to pass through a very fine mesh filter which will capture dust, mould, allergens. The purified, clean air is then sent back into the room.


Air purifiers that use HEPA filters are very popular, because HEPA filters have been tested and proven to remove up to 99.97% of airborne particles. They can remove particles that are larger than 0.3 microns, and when you consider that the majority of particles are that size or larger you can see that a HEPA filter will efficiently clean your air.

CADR ratings can be an important indication of how quickly your air will be cleaned. CADR (clean air delivery rate) will determine how much air per cubic feet can be purified within one minute. Therefore the higher the CADR rating, the more air can be cleaned at a faster rate.

Whilst HEPA filters are very good at capturing airborne particles, they are not so good at getting rid of unpleasant smells. This is where Activate Carbon filters come in, because these filters are made out of molecular sized absorbent pores that can easily attract and capture odours and gases. This is why Active Carbon filters are essential if you want to clear your room of cigarette smoke or other unpleasant, potentially damaging smells.

Some purifiers use ultra violet light to help remove harmful airborne substances because systems that use UV lights can kill bacteria, viruses and fungi. Air purifiers that have a UV light component utilise electromagnetic radiation by literally breaking down the molecules inside a particle or virus, which effectively kills the harmful organism. For this reason UV systems are good at getting rid of viruses and germs, but they are not so great at removing smells or allergens.

Ionisers create negative ions which can help destroy harmful particles. The term negative ions may sound a bit complicated, but the way it works is quite simple. Whilst some people may think negative ions are an unnatural way of filtering air, they actually occur all the time in nature. If you have a shower in your house, you already have already come into contact with negative ions.

As negative ions are common in lightening strikes, ionisers have copied this natural process to create their own artificially made negative ions. They use a ‘corona discharge’, which basically tries to mimic lightening strikes on a much smaller scale, and it works by making small electrical currents flow down a small needle until it reaches the bottom. When electrons get near the bottom, they bond with air molecules and this turns them into negative ions.

These negative ions are attracted to harmful airborne particles such as smoke, pollen, mould and viruses, and when they come in to contact with these substances they will attach themselves to the particle. The extra weight of the electron normally means the particle becomes too heavy and thus falls to the ground, although some ionisers have special measures that will help suck the particles into the air purifier.


As well as protecting against harmful particles and bacteria, negative ions have some other surprising benefits. They have been attributed to preventing headaches and restlessness, and are said to be good for stress, S.A.D and even depression. They have also been used in medical wards after some studies showed that they could effectively remove viruses.

As a side effect of their negative ion production, ionisers create small amounts of ozone. You may have only heard this term in connection to our Ozone layer, I.e the gas that helps protect our planet from radiation, but ozone is actually a small molecule which has the potential to decrease lung capacity and harm your health.

You may be wondering how on earth ionisers can promote themselves as healthy when they create a harmful substance, but the truth is that most ionisers create a very small amount of ozone. Ozone is typically a short lived gas that doesn’t linger unless a whole lot of it is generated in one go, so although some ionisers may go above the recommended limits and could damage your health, the majority produce such a small amount of ozone that it is unlikely to make any difference.

As you can see, there are many components that make up air purifiers and not all air purifiers will use the same techniques. To get the most out of your air purifier we would recommend you invest in a slightly more high-end device which includes several of the features mentioned above, such as a HEPA filter, an Activated Carbon filter and/or a UV light filter.