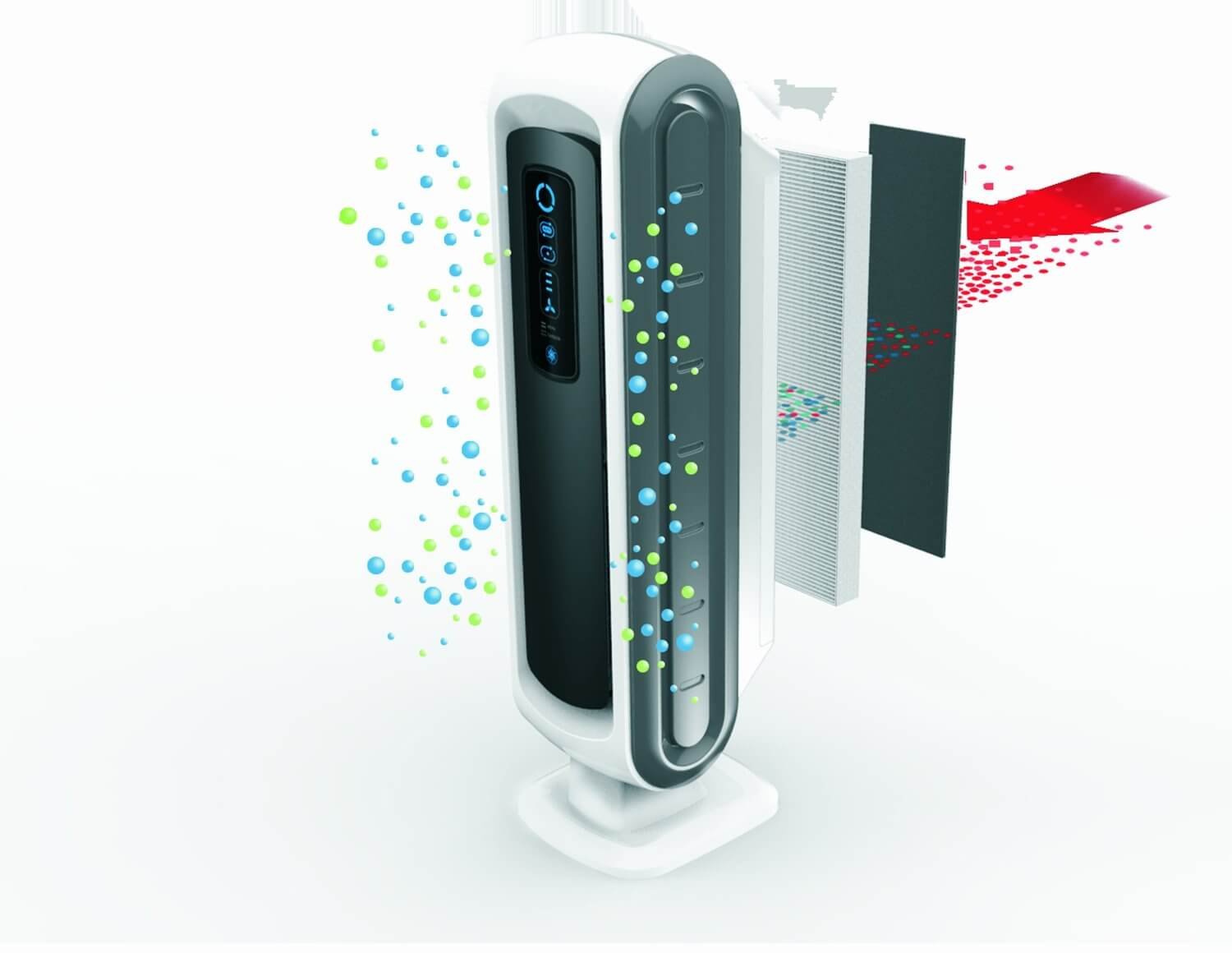 Whilst they may sound like the same thing, air purifiers and dehumidifiers actually have very different functions.

Air purifiers are designed to remove harmful particles, germs, viruses and pollutants from the air. There are different components that an individual air purifier may or may not have, but most of them will purify the air by circulating it through a filter which will then remove the negative particles and leaves you with cleaner, fresher air.

Not all air purifiers are the same of course, and different designs will have different functions. HEPA filters have become increasingly popular over the years due to their ability to remove 99.97% of harmful airborne particles. They typically use very thin filters to catch harmful particles and remove them from the air.


In contrast, ionising air purifiers use physics to create negative ions, which are attracted to harmful germs, viruses, allergens and spores. When they attach themselves to these harmful particles, the targeted particle typically becomes too heavy to remain airborne and will thus fall out of the air and won’t go into your lungs. Another possible component that can be found in air purifiers are UV lights. UV lights are ultra violet light that are used to essentially kill off harmful bacteria.

Whilst air purifiers will use different functions to rid your air of harmful particles, they do so by either catching the particles themselves or sending ions and UV lights to kill the particle in mid air. They may use different features, but what they all have in common is the ability to remove particles from the air.

Dehumidifiers have a similar aim as air purifiers. They both aim to rid the air we breath of allergens and dangerous particles, but dehumidifiers do so by sucking in excess moisture and therefore killing the germs that survive in damp environments. They also lower the humidity levels and keep your room cool, so they are ideal for warmer climates with a humidity levels of 50% or above.


Whilst air purifiers are better at removing smoke, dust, pet allergens and pollen, dehumidifiers are better at getting rid of mould and mildew particles, because mould and mildew typically thrives in warm, damp environments Dehumidifiers, like air purifiers, come in different forms. The most common form they will take is probably the humble air conditioner, because although dehumidifying is not an air conditioners soul purpose they do do it by default as they circulate cold air around the room and decrease the overall temperature. Other types of dehumidifiers include the following.

So which is better?

Whether an air purifier or dehumidifier is better for you will depend on what you want to use it for. They both have advantages and disadvantages, so lets look at some of their functions to compare air purifiers and dehumidifiers.

Getting rid of mould and maintaining a mould free environment

Dehumidifiers do not filter the air itself and thus won’t kill off mould spores, but as they do absorb excessive moisture they can get rid of mould and prevent it from forming. A dehumidifier aims to get your home humidity levels under 50%, and when it has achieved this the mould won’t be able to survive and thus the allergies and spores won’t have a home and they won’t survive either.

Air purifiers that do not come with an inbuilt fan are not going to decrease the humidity in your house, although ionising purifiers are said to make the air cooler.

As it’s name suggests, a dehumidifiers prime function is to get rid of humidity. This will cool down the air in your home and will stop you getting hot and sweaty during the summer. In this respect ,dehumidifiers are like very effective mould reducing fans.

Air purifiers help reduce breathing problems by removing allergens and harmful particles from the air you breathe. As they can effectively remove many allergens such as those that come from animals, pollen and dust, sir purifiers especially helpful for preventing asthma attacks and alleviating allergic reactions.

Dehumidifiers help get rid of mould because it first gets rid of the environment that mould thrives in. Mould and mildew are bad for people in general and can cause respiratory problems in anyone, but they are especially bad for asthma sufferers or those with pre-existing respiratory problems. As the dehumidifier will decrease mould and make the environment hostile to any more mould outbreaks, dehumidifiers can be very beneficial.

It is also worth mentioning that as well as being beneficial to your lungs, dehumidifiers can also help reduce the skin irritation that can be caused by mould and damp.

Damp in itself has quite an unpleasant smell and warm, bug infested areas and mouldy walls don’t exactly smell great either! Air purifiers extract excess moisture from the environment they are in, and so they can stop mould and damp from forming in the first place, which in itself will make your home smell better. Dehumidifiers also protects against humidity and overheating, both of which can generate bad smells of their own. Many dehumidifiers will come with an inbuilt fan, which will help circulate and cool the air and in turn blow away any nasty odours.

Dehumidifiers and air purifiers are both beneficial and you should choose one or the other based on your personal needs. If you are more concerned about humidity, mould and getting rid of the nasty smells that come with mould and mildew then you should invest in a dehumidifier. These are especially beneficial for bathrooms, which can easily get mouldy. They are also for people who live in warm areas because they help cool you down, and they are also helpful for people with asthma because mould can greatly aggravate respiratory conditions.

If pollen, dust and other allergens are more of a concern, then you should pick an air purifier. Air purifiers can cleanse your air, get rid of bad smells, kill viruses and germs and help alleviate respiratory problems. Depending on which air purifier you choose you could also eradicate bad smells by using an active carbon filter, kill germs by using an ioniser or UV lights, and ensure that they air you breathe is free from harmful particles.